I suppose the best a promoter could ask for is a sold out show. Tonight was that rarity. Not that The Studio doesn’t always feel full. After all it only holds 60 & has its own supporters who don’t go to any other of our venues. Also it was wonderful that it was a Bluegrass gig showcasing two very talented ladies. Im not sounding big headed but we kinda introduced that genre to the north east decades ago & it just felt good to me. With Molly Tuttle being the first ever female, awarded the Bluegrass guitarist of the year in US, her playing was sensational and rapturously received. Its four years to the day that my football team won the play off semi final & Molly’& Rachel performance tonight was celebrated as much as that…and afterwards….. they went for a “winners circle” drink on the quayside. 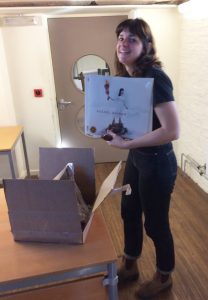